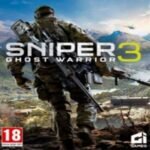 Sniper: Ghost Warrior 3 is a tactical shooter video game developed and published by CI Games for Microsoft Windows, PlayStation 4 and Xbox One, and was released worldwide on 25 April 2017. It is a sequel to Sniper: Ghost Warrior 2, and is also the first game in the series to feature an open world environment. Wikipedia