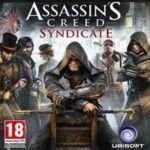 Assassin’s Creed Syndicate is a historical action-adventure open world stealth video game being developed by Ubisoft Quebec and to be published by Ubisoft. It is set to be released on the PlayStation 4 and Xbox One and for Microsoft Windows. It is the ninth major installment in the Assassin’s Creed series, and the successor to 2014’s Assassin’s Creed Unity.

In 1868, at the tail end of the Industrial Revolution, with the Assassin Brotherhood all but eradicated, twins Jacob (Paul Amos) and Evie Frye (Victoria Atkin) leave Crawley for London and arrive to find a city controlled by the Templars, with both the Church and the Monarchy losing their power. Raised as Assassins to follow the Creed, Jacob and Evie aim to take back the city from Templar control by infiltrating and uniting London’s criminal underworld, aided by notable figures of the era such as novelist Charles Dickens, biologist Charles Darwin and inventor Alexander Graham Bell, foundational philospher of modern nursing, Florence Nightingale and Queen Victoria.