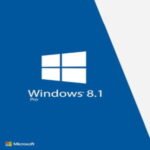 Windows 8.1 is a release of the Windows NT operating system developed by Microsoft. It was released to manufacturing on August 27, 2013, and broadly released for retail sale on October 17, 2013, about a year after the retail release of its predecessor, and succeeded by Windows 10 on July 29, 2015. Wikipedia

Windows 8.1 Professional OEM is the upgraded version of the operating system from Microsoft. Purchase the Windows 8.1 OEM key and use your favorite features even faster and better. It is your proven OS in an entirely new form, equipped with tools enabling satisfaction in work, study, or entertainment.