(INSTANT REPLY FOR ANY HELP) 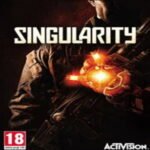 Singularity is a 2010 first-person shooter video game developed by Raven Software and published by Activision and released for Microsoft Windows, PlayStation 3 and Xbox 360. It is built on Epic Games‘ Unreal Engine 3.

The game begins when an electromagnetic surge from an uninhabited island called Katorga-12, once held by the Soviet Union, damages an American spy satellite. A group of U.S. Recon Marines, which includes the protagonist, Captain Nathaniel Renko, goes to investigate. Another surge disables the unit’s helicopter, and it crashlands on Katorga-12. Following the crash, Renko begins to phase between the present and 1955, the date of a catastrophic accident on the island. He arrives in 1955 just in time to save a scientist named Nikolai Demichev from dying in a fire.