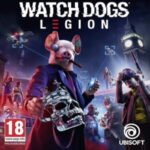 Watch Dogs: Legion is an action-adventure game played from a third-person perspective, and takes place within an open world setting based upon London, which can be explored either on foot ─ utilizing parkour moves ─ vehicles, or fast-travelling via the city’s Underground stations. The game is composed of several missions, including those that progress the main story, liberation missions aimed at freeing the city’s boroughs featured in the setting, recruitment missions for new playable characters, and various side-activities, with players able to freely pursue a mission or activity, or explore the city for secrets and collectibles. Each mission’s objectives can be handled via one or several different approaches: an open-combat approach utilizing a variety of weapons; a stealth approach utilizing the environment to avoid detection and monitoring enemy patterns; or a hacking approach using any hackable object to subdue enemies with traps or distractions, while seeking out objectives via cameras and remotely accessing them. Combat includes a mixture of gun fights ─ involving lethal and non-lethal fire-arms ─ and hand-to-hand combat moves, with enemies making use of different methods depending on how the player acts against them in combat (i.e. a guard hit with a punch will use melee attacks). Players can be pursued by enemies when escaping, including hostile drones, but can lose them by utilizing hack-able environmental objects (i.e. vents) and avoiding line of sight with pursuers.

Alongside traditional elements of gameplay from previous titles, Legion uses multiple playable characters that can be recruited and controlled at any time to complete missions. Each playable character has their own unique skills and backgrounds, and can be lost permanently if players enable the option of permadeath before starting a new game. Four-player cooperative multiplayer will also be included, allowing players to team up to complete missions or explore London together.

Legion was released on October 29, 2020 for Microsoft Windows, PlayStation 4, Xbox One, and Stadia, and as a launch title in November for the Xbox Series X/S, the PlayStation 5, and Amazon Luna. Upon release, the game received generally favorable reviews, yet faced some questions over the multiple playable character aspect and repetitive mission style, and criticism over its open world design and driving mechanics.